Bassist Bill Sharpe describes his musical self as "slick, funky, bad-ass and fun. I'm from the high-energy situation - I like the groove!" 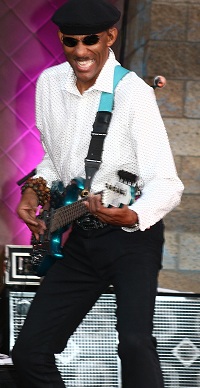 Watching him play, one can actually see, why he is called "The Rubber Hand Man" With his theatrical, demonstrative style, and the importance of the bass groove in music, he slaps it, he pulls the strings, he smiles at the audience, he teases: in other words, he gets you to pay attention to what his instrument is doing to the music.

"At times, I've played bass as if it was a lead instrument, but I always keep in mind that the bass is the bottom and the root of the music," Sharpe states.

Sharpe has performed on scores for feature length motion pictures and television films. He has also performed in front of cameras, as a member of the house bands or guest bands as well as on TV films and videos. 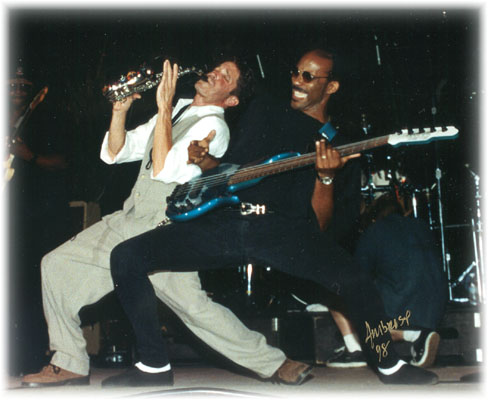 Sharpe has also toured and performed on world class stages and venues all over the world with some of the best artists and musicians in the business.

Bill Sharpe continues to spread his demonstrative low-end sounds to grateful ears and eyes everywhere. And he loves every moment of it. "Sure, you have to play the right notes," he says, "but for me, feeling the movement of the bass is what playing is all about. That's the turn-on when I'm playing. When I'm performing, I demonstrate what the bass is supposed to be doing - which is moving you and grooving you!"

Sharpe's latest endeavour is his recording project for his first CD release. It is well under way and will release two singles from the CD on September 25th, 2012.